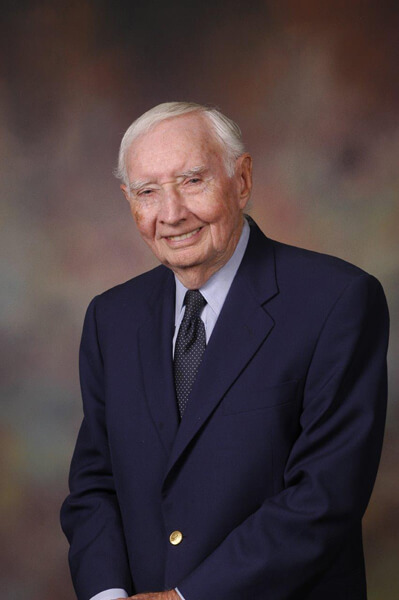 Born two years before the start of the Great Depression, James M. Furey Sr., Esq. (St. John’s University, ’51C, ’57L) took advantage of every opportunity he could to succeed as a student and as a respected litigator in the field.

Those opportunities were precious to the East Rockaway, NY, native. “Two years after I was born,” said Furey, “the stock market crashed, and my father’s Wall Street firm collapsed.”

Like many people during the Great Depression, the family had to make do with what they had. Furey briefly attended Bishop Loughlin High School in Brooklyn but transferred to East Rockaway High School, where he played football and served as captain of the track team. “As a young man, I never imagined that I would have the opportunity to go to college, or that I would ultimately have the opportunities that I did.”

Despite having limited resources, Furey was determined to attend college. After serving in the US Navy for one year, he qualified for the GI Bill. The benefit allowed him to attend St. John’s for three years. At that point, he took a job in construction, saving enough money to complete his studies and earn his degree at the University.

Furey received two job offers upon graduation-one as a claims adjuster at Liberty Mutual Insurance, the other at a bank. “I chose Liberty Mutual because they offered me five dollars more a week,” he recalled. After a few years, he joined The Hartford Insurance company, where he became interested in pursuing a career in law. Returning to his alma mater, he took night classes at St. John’s School of Law.

In 1957, Furey graduated from the Law School and approached his supervisor about transferring to the legal department at The Hartford. “He was reluctant to lose me, but a ‘higher-up’ approved this transfer and hired me as a staff attorney.” Furey worked mostly on medical malpractice cases. In 1961, he was appointed attorney of record for The Hartford in their downtown New York office.

In this new role, Furey worked closely with a number of private law firms and ultimately left The Hartford to serve as a manager of one of those firms. After some time, he reunited with Russell Clune, a friend from elementary school. Together, they started a small firm of their own. In 1968, he founded the firm which ultimately became Furey, Furey, Leverage & Darlington, PC. 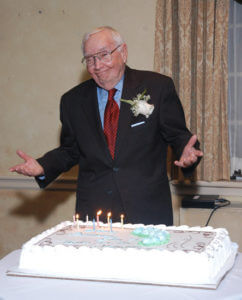 Furey has lectured at Columbia University’s College of Physicians and Surgeons, New York-Presbyterian Hospital, the Nassau and Suffolk County Bar Associations, and various other professional groups. He was also a member of the arbitration panel for the United States Eastern District.

Furey was proud of his time at St. John’s. “I have never felt the need to apologize for my St. John’s roots,” he said. “I feel safe in saying that statement expresses the view of my many friends and opponents, too.”